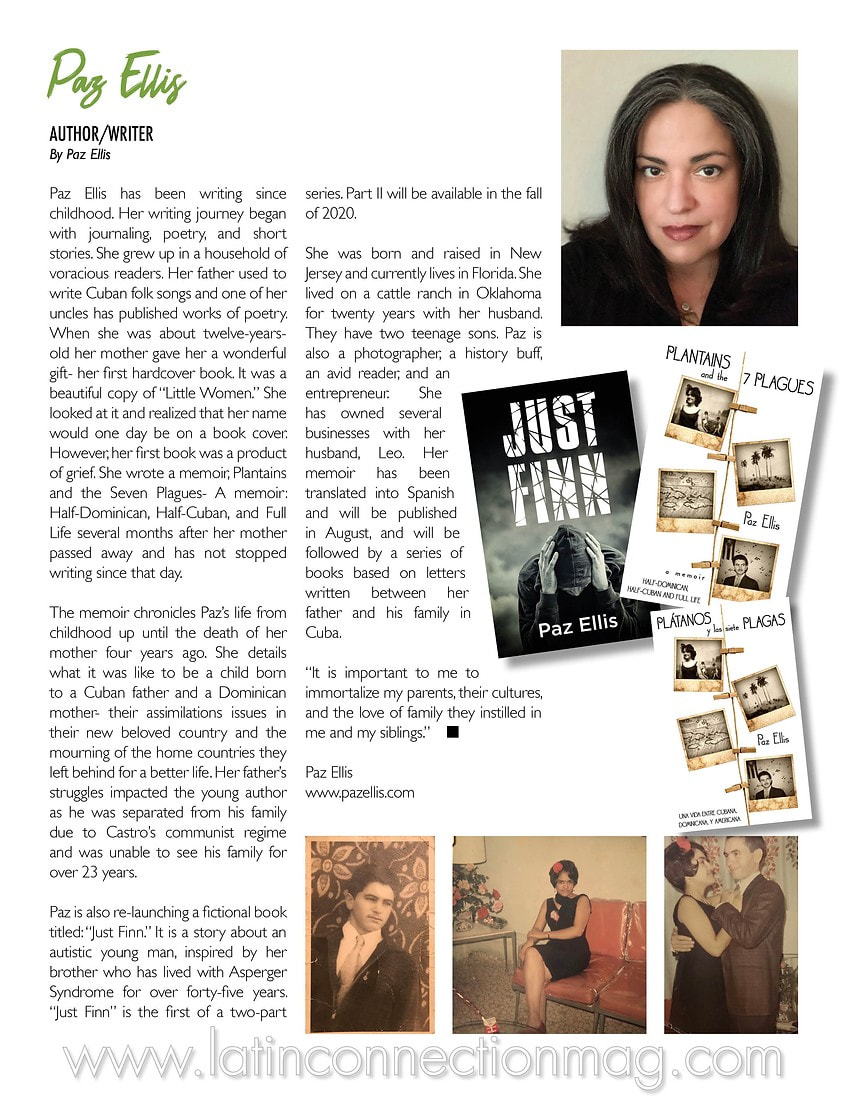 Paz Ellis on the plight of Citizen Children of Immigrants

When thinking about immigration, it's easy to focus on the plight of undocumented and dacamented people, as if they were the only ones affected by America's immigration policy and climate of hate towards immigrants. I am guilty of viewing the citizen children of immigrants as lucky and carefree Americans.

The Second Edition Of Paz Ellis' Plantains And The Seven Plagues: A Memoir: Half-Dominican, Half-Cuban, and Full Life

First Posted: May 29, 2020 05:08 AM EDT Paz Ellis just released her latest masterpiece Plantains and the Seven Plagues: A Memoir: Half-Dominican, Half-Cuban, and Full Life Second Edition On Amazon. With the spectacular success of her book's first release, this is finally available in its second edition, with a possibility of more books to come in the future.

A couple of months after her mother passed away, Paz Ellis sat down to write. Ellis grew up in an expansive, tight-knit, mixed-heritage family in New Jersey. Her Dominican mother and Cuban father provided her with a family history and cultural legacy that informed her experiences and sense of self,

Listen to "PAZ ELLIS AUTHOR OF PLANTAINS AND THE SEVEN PLAGUES" on Spreaker.
Listen to "IQ Podcasts: Your Business Reality, CB, with Author Paz Ellis Ep. 81" on Spreaker.
PRESS RELEASE
Paz Ellis’s​ ​Plantains and the Seven Plagues: A Memoir: Half-Dominican, Half-Cuban, and Full Life​ Second Edition
Out Now On Amazon

April 30th, 2020 – Following the massive success of its initial release, this book is now available in its second edition, with many more expected to come in the future. Author Paz Ellis’s ​Plantains and the Seven Plagues: A Memoir: Half-Dominican, Half-Cuban, and Full Life​’s second edition is now out on amazon.com, and is climbing the “Hispanic & Latino Autobiographies” category at a dizzying pace.

This candid memoir chronicles Mrs. Ellis’s “cross-cultural and trans-generational journey” from childhood to adulthood as part of a loving and tight-knit first-generation immigrant family, against the backdrop of 1970s and 1980s West New York, New Jersey. Often painting a stark contrast between trying to adapt to the realities of American life, all while maintaining the core of her Cuban and Dominican ancestry, Mrs. Ellis crystallizes what it means to lead a “multi-hyphenated” life as a Hispanic in the United States.

In what is, in essence, an ode to familial love and the yearning for belonging, Plantains and the Seven Plagues: A Memoir: Half-Dominican, Half-Cuban, and Full Life is a heartfelt, witty and, at times, brutally honest account of navigating the concepts of identity, memory, and finding one’s place in an amalgam of differing definitions of cultural principles.

Reviewing the book on amazon.com, Claudia, a reader of ​Plantains and the Seven Plagues,​ wrote “Paz Ellis describes her journey growing up in an immigrant town where she constantly struggles with family expectations and responsibilities, idiosyncrasies of being a teenager all while living the American dream. The book takes you through a roller coaster of emotions. I laughed at the Cuban and Dominican expressions and as she described growing up in a Hispanic household and I also cried as she described her parents struggle to make ends meet and live the American dream. This is definitely a 2 thumbs (sic) up!”
​
The second edition of ​Plantains and the Seven Plagues: A Memoir: Half-Dominican, Half-Cuban, and Full Life is available for purchase in paperback and ebook form on Amazon, B&N, Apple books, kobo and other book retailers nationwide.
###
Media Contact
Paz Ellis
paz@pazellis.com
https://www.pazellis.com/
Proudly powered by Weebly